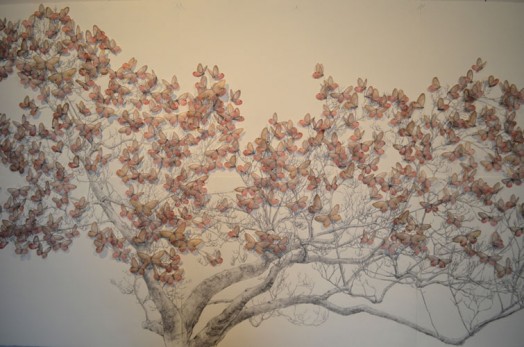 Wave Hill Curatorial Fellow Anna Robinson-Sweet shares some of what she has observed as the first session of the Winter Workspace 2013 residency comes to a close.

In mid-February, during Open Studios for Winter Workspace 2013, visitors to Glyndor Gallery viewed the work of six artists—some of the work finished, some ongoing and some just commenced— who have spent the past six weeks transforming the gallery into studio spaces. The artists—Manuel Acevedo,Zachary Fabri, Asuka Hishiki, Maria Hupfield, Paloma McGregor and Linda Stillman —were present to explain the projects they have been developing at Wave Hill.

–Toward the end of the first session of Winter Workspace I stopped by Asuka Hishiki’s studio and was amazed to see an entire wall of her studio covered with butterflies.Dozens of copies of a hand-drawn butterfly had been printed on vellum and pinned to a delicate, pencil drawing of a tree, appearing almost like leaves or flowers. I was amazed by this piece, tentatively titled Butterfly Tree, not only because of its beauty but also because…….