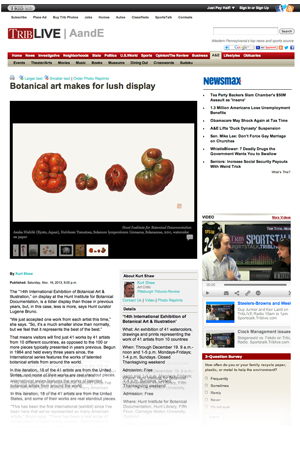 The “14th International Exhibition of Botanical Art & Illustration,” on display at the Hunt Institute for Botanical Documentation, is a tidier display than those in previous years, but, in this case, less is more, says Hunt curator Lugene Bruno.
“We just accepted one work from each artist this time,” she says. “So, it’s a much smaller show than normally, but we feel that it represents the best of the best.”
That means visitors will find just 41 works by 41 artists from 10 different countries, as opposed to the 100 or more pieces typically presented in years previous. Begun in 1964 and held every three years since, the International series features the works of talented botanical artists from around the world.

— Just as realistic is a watercolor of four heirloom tomatoes by Asuka Hishiki of Kyoto, Japan, which, again, look so real you could pluck them from their page. And a drawing of a chrysanthemum, “Chrysanthemum #2,” by Roberta Mattioli of Milan, Italy, is just as detailed, which is amazing considering the whole thing was drawn in black ball-point pen. “The background is just layer upon layer of scribbles,” Bruno says…….